Epoxy resin is a thermosetting polymer resin with excellent comprehensive properties, which currently has been in the coatings, insulating materials and aerospace, aviation and other fields widely used. Among them, 7628 fiberglass cloth as a reinforcing material, using resin pre-impregnation process, Fiberglass / epoxy composite parts made by prepreg molding and high-temperature autoclave molding have been successfully applied to aerospace and aerospace vehicles, making important contributions to the structural weight loss and low-cost operation of aircraft. However, the cured epoxy resin has the characteristics of heat resistance, flame retardancy and poor toughness, which limits the application of epoxy composites to a certain extent so that require existing flame-retardant epoxy resin and toughening modification. In recent years, with the rapid development of European and American aviation industry and extensive demand, lightweight, high toughness and flame retardant modified epoxy / glass fiber prepreg composite materials have been widely used in aircraft cabin components manufacture, and a small number of manufacturers have developed a series of different types of resin fiber reinforced series of products, Such as Hexcel M26T, M76, 913 and other grades of modified epoxy resin and its different fiber series of prepreg composite materials. At present, there are many researches on flame retardant and toughening modification of epoxy resin in the world, but the related performance data reported in the open literature are not complete; In this paper, developed by the national flame-retardant and toughening modified epoxy resin matrix, satin E-glass cloth as a reinforcing material, the modified epoxy / glass fiber prepreg was successfully prepared by solution pre-impregnation, and Boeing BMS8-79 material specifications for the technical reference to the modified resin matrix process performance, thermal properties and the physical properties of the prepreg composites and the mechanical properties and flame-retardant properties of the thermo-compression molded cans were systematically analyzed.

Experiment
Raw materials and performance characterization
The epoxy resin synthesized by the toughening and flame retardant modification was used as the resin matrix, Perform the following performance tests: The resin was subjected to a differential scanning calorimetry (DSC) test in a nitrogen atmosphere using a Perkinelmer 7 series thermal analyzer, The heating rate of DSC was 10 ℃ • min – 1; The resin was analyzed by Fourier transform infrared spectroscopy (FTIR) with Perkin-Elmer 782; The oxygen limit exponent (LOI). Using the satin glass fiber cloth EW250F-120 as a reinforcing material, Its main performance as shown in Table 1.
Table 1 EW250F – 120 fiber cloth main performance

Prepreg preparation and composite laminate molding
Using preparation of Flame Retardant/ Glass fiber cloth prepreg. First open the dipping machine before the treatment section and after the drying section of the heating device, Set the pre-treatment and post-bake temperature during dipping, and then use the feeler to set the squeegee roll spacing adjustment. Weighing the appropriate amount of epoxy resin solution, which will be placed in the plastic tank. Using a certain amount of acetone on the plastic tank of epoxy resin dilution, the proportion of epoxy resin is adjusted to set value. To be dipped in the pre-treatment section and after baking temperature stability Start dipping machine. Set the dipping machine speed and winding tension, start to prepare the flame-retardant epoxy/ Glass fiber prepreg. Using the upper and lower double-layer isolation film on the rewinding of the prepreg for interlayer isolation, so that the prepreg has a good cutting and paving process performance. The finished roll is sealed with a moisture-proof bag and stored at low temperatures below 12 °C.

Results and discussion
Modified epoxy resin properties
Figure 1 is the DSC curve of the epoxy resin, It can be seen from the figure the initial curing temperature of the resin between 120 ~ 130 ℃, The peak temperature was 140-170 ° C( Tonset : 141. 1℃ ; Tpeak : 158. 1℃ ; Toffset : 166. 5℃ ), So that Determine the final material curing system for 130 ± 5 ℃, 90 ± 5min.
Using infrared on the epoxy resin by 130 ± 5 ℃, 90 ± 5min before and after the structural changes in the tracking analysis. As can be seen from Fig 2, The resin was cured at 916 cm -1, The characteristic absorption peak of the epoxy group is shown by curve A. After the resin has been completely disappeared as shown in curve B shows. Indicating that the resin has been completely cured under the above curing conditions.

Physical properties of prepregs
The flame – retardant epoxy prepared by the solution pre – impregnation method/Fiberglass prepreg is a natural white, its appearance and shape evenly. The physical properties of prepregs according to BMS8 – 79 were tested including volatile content, resin content, resin fluidity and gel time. As shown in Table 3, the results show that the properties of flame retardant modified epoxy / glass fiber prepreg prepared in this study can meet the specifications of BMS8 – 79, So the prepreg has good physical properties. In addition, the prepreg surface layer is soft, moderate viscosity, with good spreading. Consequently, the prepreg has good process performance, suitable for batch production of composite components. 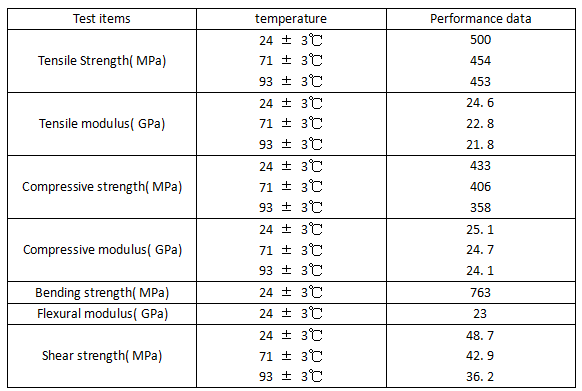 Mechanical Properties of Composite Laminated
Through the DSC test of the modified epoxy resin, the curing system of 130 ± 5 ℃ for 90 ± 5min was determined. Pre-coated prepreg can get the thickness of the laminated board obtained by the process of the autoclave process is uniform. The material is densely packed, appearance color is natural. The mechanical sample obtained after the mechanical system, The panel cross-section (machined surface) is dense, no material layers and gaps and other defects, showing good combination of resin and fiber. According to their respective standards, the composite laminates were subjected to tensile, compression, bending and shear tests. The test results are shown in Table 4. Table 4 of the test data can be seen, The mechanical properties of the composites at room temperature (24 ± 3 ℃) can not only meet the requirements of BMS8 – 79, but also exceed the performance data of similar advanced flame – retardant modified epoxy / glass composites. It is worth noting that the tensile, compressive and laminar shear properties of the composites at room temperature (71 ± 3 ℃, 93 ± 3 ℃) are less than 10% lower than those at room temperature, which is significantly higher than that of BMS8-79 Performance indicators (50% to 100%) and the performance of similar materials data. Two factors can be used to explain the phenomenon: Firstly, the toughening agent greatly improved the mechanical properties of the original epoxy resin, but the addition of the toughening agent did not reduce the heat resistance of the epoxy resin, indicating that the addition amount of the epoxy resin is suitable. Secondly, a suitable solution impregnation process ensures that the prepared prepreg has a good process. For example, the resin fluidity is maintained between 12% and 20%, the composite laminated board resin after the molding process by the autoclave process is closely integrated with the reinforcing fiber interface and its volume ratio is suitable so that the reinforcing effect of the glass fiber is greatly strengthened. These can improve the final composite at room temperature and medium temperature mechanical properties. Therefore, in this paper, the flame retardant, toughening modified epoxy resin as the matrix and E-glass fiber cloth as enhance the material, the prepreg prepared by the solution impregnation process has good physical and technological properties, and its mechanical properties of the composite laminate are excellent. 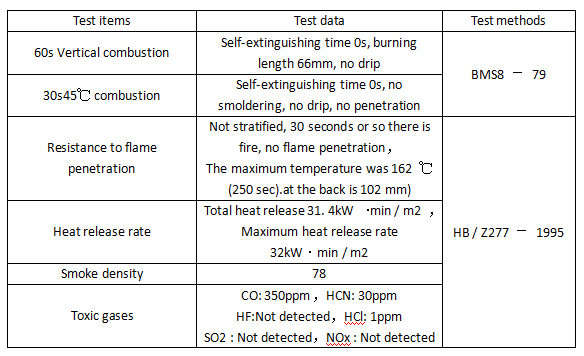 Flame Retardant Properties of Composite Laminate
As the modified epoxy/ Glass fiber composite laminates for flame retardance testing, The composite panels by 45 ℃ 30s vertical combustion test before and after comparison of the sample photos shown in Figure 3. It can be seen from Figure 3 (b), The sample has burn marks (black), but did not burn through, and there was no smoldering and dripping in the test. Table 5 lists the results of other relevant flame tests, including 60 s vertical burning, flame penetration resistance, heat release rate, smoke density, and toxic gas. The test results in Table 5 can meet or exceed the requirements of the BMS8 – 79. For example, After the test of composite material flame penetration , behind the back of 102mm ,the maximum temperature of 162 ℃ (250s), Meet the <204 ℃ of the index requirements; Smoke density 78 is also significantly lower than the <200 index requirements. In addition, The heat release rate of the composites is 31.4kW • min • m - 2, which is much lower than that of <65kW • min • m - 2, and is better than the performance data of the same materials. The test data in Table 5 show that the flame retardant modified epoxy / glass fiber composite has excellent flame retardancy. On the one hand, the addition of flame retardant greatly improved the flame-retardant properties of the original epoxy resin, on the other hand, good physical and technological properties of the prepreg ensure a firm bond between the cured resin and the fiber interface, and Further improve the overall flame-retardant properties of the material. In addition, the lower smoke density and toxic gas emissions also proved that the flame retardant is suitable for epoxy resin. In conclusion
In this research ,the epoxy resin was modified by flame retardant and toughening , E-glass fiber cloth as enhance the material, a flame retardant epoxy / glass fiber prepreg was successfully prepared by solution pre-impregnation, the mechanical properties and the flame retardancy of the composite laminates formed by the autoclave process were tested. Based on the prepreg and its composite laminate test, concluded as follow:

The physical and technological properties of the prepared flame retardant prepreg are good, which can meet the needs of the subsequent preparation of composite materials.

The prepreg prepared by the process of hot – pressing formed into Composite Laminate, The resin matrix is firmly bonded to the fiber interface, because of the introduction of flexibilizer and flame retardant, The material at room temperature, medium temperature mechanical properties and flame-retardant properties have been greatly improved.

For more information, Please contact us at system@corefrp.com. Our technical service representative will at your service!